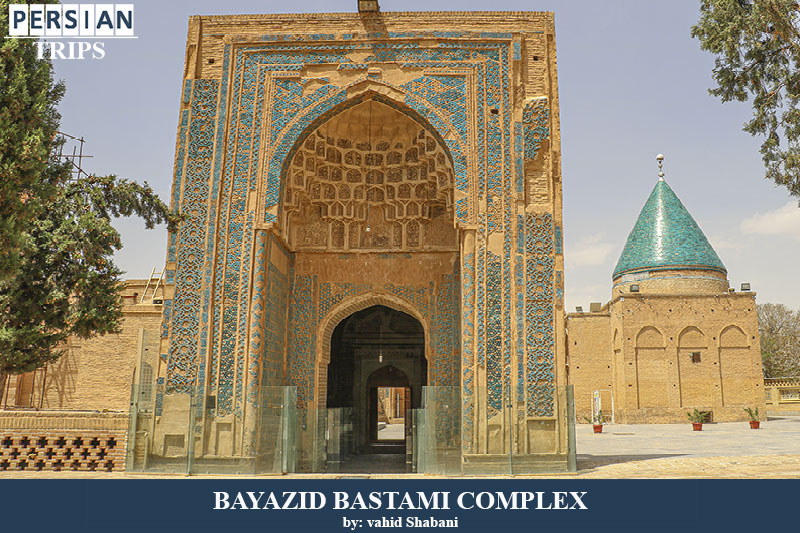 Bayazid Bastami Complex in the historical and ancient city of Bastam Shahroud city in Semnan province, constitutes a large collection of works from the third century AH onwards.

This complex includes the shrine and monastery of the famous mystic of the third century AH, Abu Yazid Tayfur bin Isa bin Soroshan Bastami, nicknamed the Sultan of the mystics. The tomb of Bayazid Bastami is in the form of a simple tomb without any kind of decoration. The tomb of Bayazid Bastami is located in the southern corner of the Bastam courtyard and historical complex, next to the dome and porch of Ghazan Khan. In general, the complex includes monasteries, mosques, minarets, towers, shrines, etc.

The building of Bayazid Bastami Mosque is located next to Imamzadeh Mohammad in Bayazid Bastami historical complex and consists of two parts for men and women with two naves perpendicular to each other. The building of the male part is located on the remains of a Seljuk mosque and has an altar decorated with plastering with Islamic and plant motifs. There are inscriptions in the third line and Nasta'liq belonging to the patriarchal and Qajar period on the top of the altar. The women's section is also a long and narrow hall with beautiful plastering on the roof. The minaret is located on the eastern side of Bayazid Mosque and its construction date is 1120.
Bastam Mosque, with a rectangular courtyard, is located on the south side of the Bayazid Bastami Historical Complex and was built by Ghazan Khan. Bastam Mosque has three openings that are connected by arched gates. Imamzadeh Mohammad is located on the south side of the courtyard of the Bayazid Bastami complex and is the burial place of the grandson of Imam Sadegh (AS). The building of Imamzadeh is similar to the dome of Ghazan Khan. The original construction of the tomb belongs to Ghazan Khan and its reconstruction belongs to the Aljatio period. The porch of the Imamzadeh is tall and has extremely beautiful brick decorations.
Kashaneh Tower is also located in the tomb of Bayazid Bastami. The height of the tower is about 20 meters and its exterior is edgy and has thirty angles. According to the inscription on the entrance, the date of construction of the tower is 1300. The interior part of the tower is hexagonal. In the upper part of the tower, two rows of brick inscriptions in Kufic script can be seen, in which the name of Aljatio and the year 1323 are written.
Bayazid Bastami Tomb Complex is one of the most important attractions of Semnan province and sightseeing in it brings special peace to visitors.