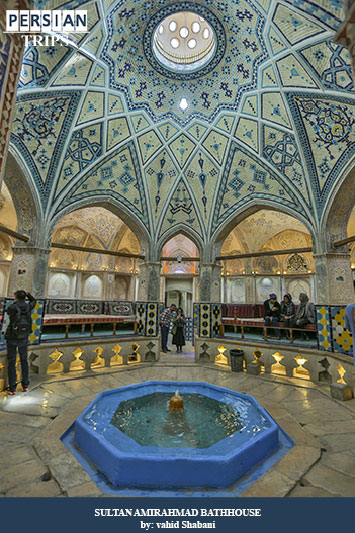 Kashan Sultan Amir Ahmad bathhouse belongs to Safavid dynasty and the construction of this building belongs to this period. This amazing building is one of the most beautiful baths in Iran.

This bath has received a lot of attention and protection due to its special historical antiquity. Also, this building was recognized as a national heritage in 1957 by the Cultural Heritage Organization of Iran. It is worth mentioning that the name of this bath is derived from the name of Imamzadeh Sultan Amir Ahmad, whose tomb is located near the same bath. The construction of this bath is very special and eye-catching. The architecture of this building is such that there is a large octagonal hall with a large octagonal pool in the center. The middle space of the hall is surrounded by 8 columns that separate the seating area from the middle and main space.
Although this part is not part of the main space of the building, it was used as a dressing room or a place for people to talk and meet each other. Arched ceilings, mosaics and paintings that have beautifully adorned this building, mark one of the architectural masterpieces and the peak of Iranian taste in ancient times. In ancient Iran, baths played an important role in meetings and social relations and even worship. Private baths of Sultan Ahmad Kashan bathhouse includes the main space for washing or Garmkhaneh. Garmkhaneh and Sarbineh, which is the meeting place, are connected by a corridor that has many twists and turns. The purpose of these mazes is to control the heat and humidity between the two spaces.

Different sections of Kashan Sultan Amir Ahmad Bathhouse include Garmkhaneh, Sarbineh, hall, etc. This building is one of the most complex buildings in terms of construction. This space is built below ground level to maintain its internal heat. This helps to retain heat and save energy. The art of engraving on a limestone surface and the art of cutting limestone is one of the beautiful decorations of this bath, where you can find the peak of Iranian art. Researchers have been able to identify 17 layers of restoration in this building, which indicates the antiquity of the building. Water is supplied by two wells in this bathhouse. Clay pipes were also used to move water between sections. 7 layer of plastering and their tiles in turquoise and gold blue have made the bath of Kashan Sultan Ahmad one of the most amazing buildings in Iran. The roof of this bath consists of several domes on which convex glass is used to provide light for the bath. The theory of making baths before the arrival of Islam in Iran is also common, but after the arrival of Islam in Iran, since ablution is one of the duties of Islam, baths have become an integral part of Iranian life.
The history of Kashan Sultan Amir Ahmad Bathhouse
Sultan Amir Ahmad Kashan Bath is a 16th century public bath built during the Safavid dynasty. At that time, the mosque, bazaar, house, water storage and bath were among the five main means of subsistence. The baths were so important that the number of baths and mosques was almost the same. According to the documents and their study, this bath was built during Seljuk period, but the top of this bath dates back to Qajar period. After the earthquake that occurred in 1772, the remains of the bath are attributed to the Seljuk period, but Sarbineh section proves something else.